Ever since I started watching Great British Baking Show, I added three books to my ever-increasing collection of cookbooks. Do I bake? No sir, I do not! At least not very well. I am not alone in this obsession with cooking shows, and cookbooks. According to NBCNews.com, roughly 18 million cookbooks were sold in 2018 and annual sales of cookbooks have increased by 21% or over in at least the last two years 1, 2, 3. The format of these books has changed too – more glossy paper with pictures than a collection of over-running text documenting the recipes.

So, how do we find our cookbooks? We start at Amazon.com reviews, of course! Combining my fascination with cookbooks and my passion for Data Science, here is my attempt to help my fellow cookbook-enthusiasts in finding their next purchase by building a recommender system based on book collections and user reviews at Amazon.com. I’ve used Natural Language Processing (NLP) methodologies, and unsupervised learning in clustering books together in finding topics and sub-topics.

Who else would benefit from such a recommender system? Vendors looking to increase their on-line sales by making appropriate and relevant book suggestions to their customers. And small business book stores that have limited space to store their books, so they can pick titles similar to their previous sales.

My approach involves building a hybrid recommendation system that combines:

A collection of user reviews and product information from Amazon.com is available from the University of California, San Diego Computer Science department [4]. This dataset spans from 1996 to 2018, and was trimmed to include only cookbook reviews. This resulted in about 45,000 cookbooks with 29,000 (65%) of them with no user reviews, and the rest - about 16,000 cookbooks - with 428,000 reviews. Amazon reviews dataset consist of two separate data files in JSON format:

An illustration of how data looks on Amazon.com website is shown in Figure 1. 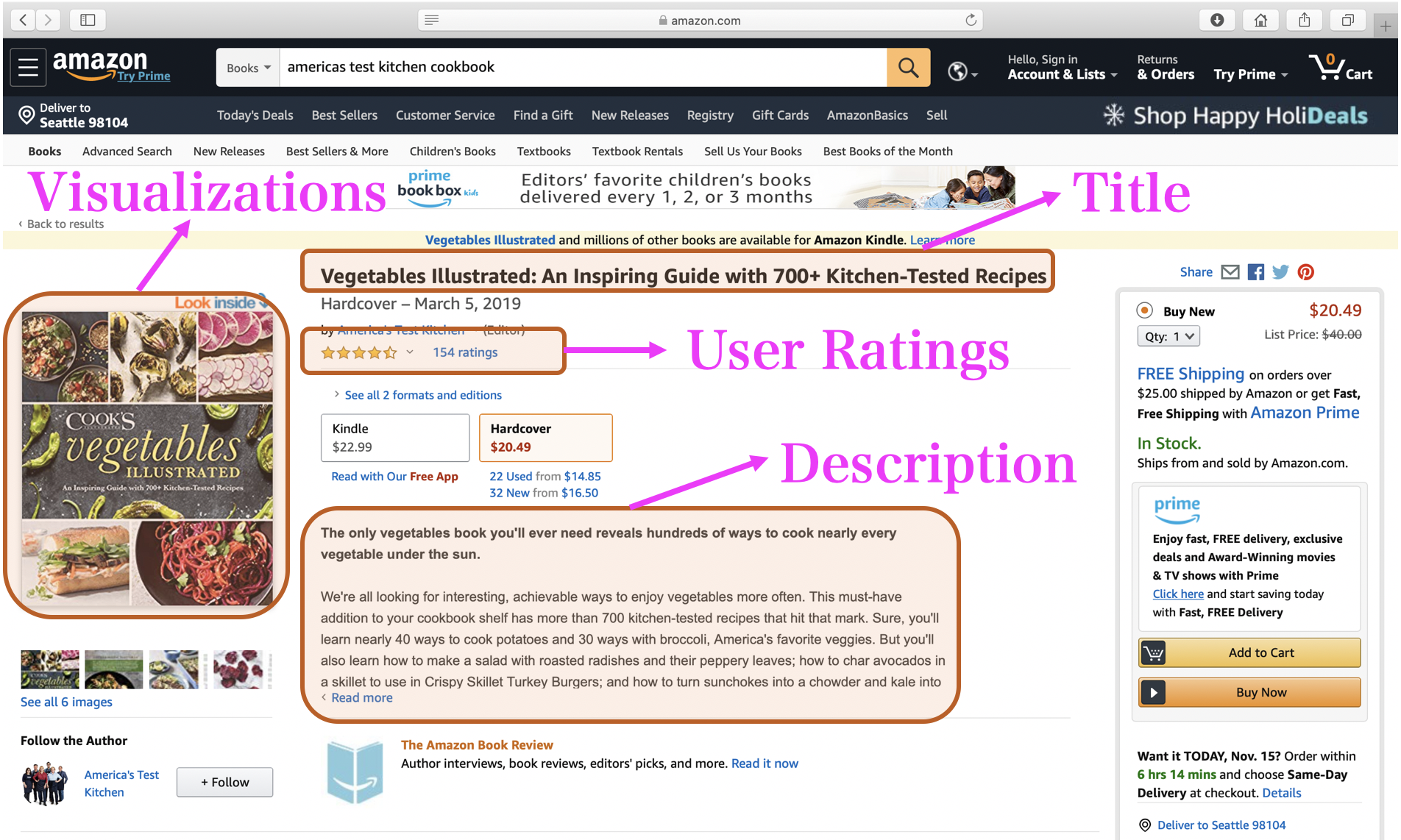 The data processing and modeling involved a number of steps, each with variations as shown below:

A K-means clustering algorithm was tested after the dimensionality reduction step, but was later determined to be not too beneficial to the cookbook recommendation system. The model that produced best results (in qualitative terms) is a combination of TF-IDF and LSA.

A number of tools and technologies were used in performing these steps and they include:

The three stages I’ve used in building my hybrid recommendation system are as shown below. Note that each stage is distinct and does not share any inputs. This was intentional to maximize what models can learn from each of those input categories in isolation. An alternative considered was to inform each step what the previous steps have learned but that makes the approach slightly larger than the scope of this project and I hope to explore that at a later date.

Additional exploration of the dimensionality reduction step was performed by projecting the ten dimensional space onto two dimensions for some select combinations of dimensions to get a better understanding of the topic modeling space.

My intuition was that book titles carry ‘quality information’ that is distinct from book descriptions, as titles are meant to be succinct, catchy and to the point. Book titles are reviewed, edited and marketed carefully by authors and publishers and carry more weight than cookbook descriptions. On the other hand, book descriptions carry more ‘quantity of information’ as they use more vocabulary and are more likely to connect diverse concepts. The following two figures confirms this intuitions as the projected space of book titles after LSA is sharp, clean and distinct. The projected space of book descriptions after LSA on the other hand, spreads and has intersecting branches/blobs (Figure 4). 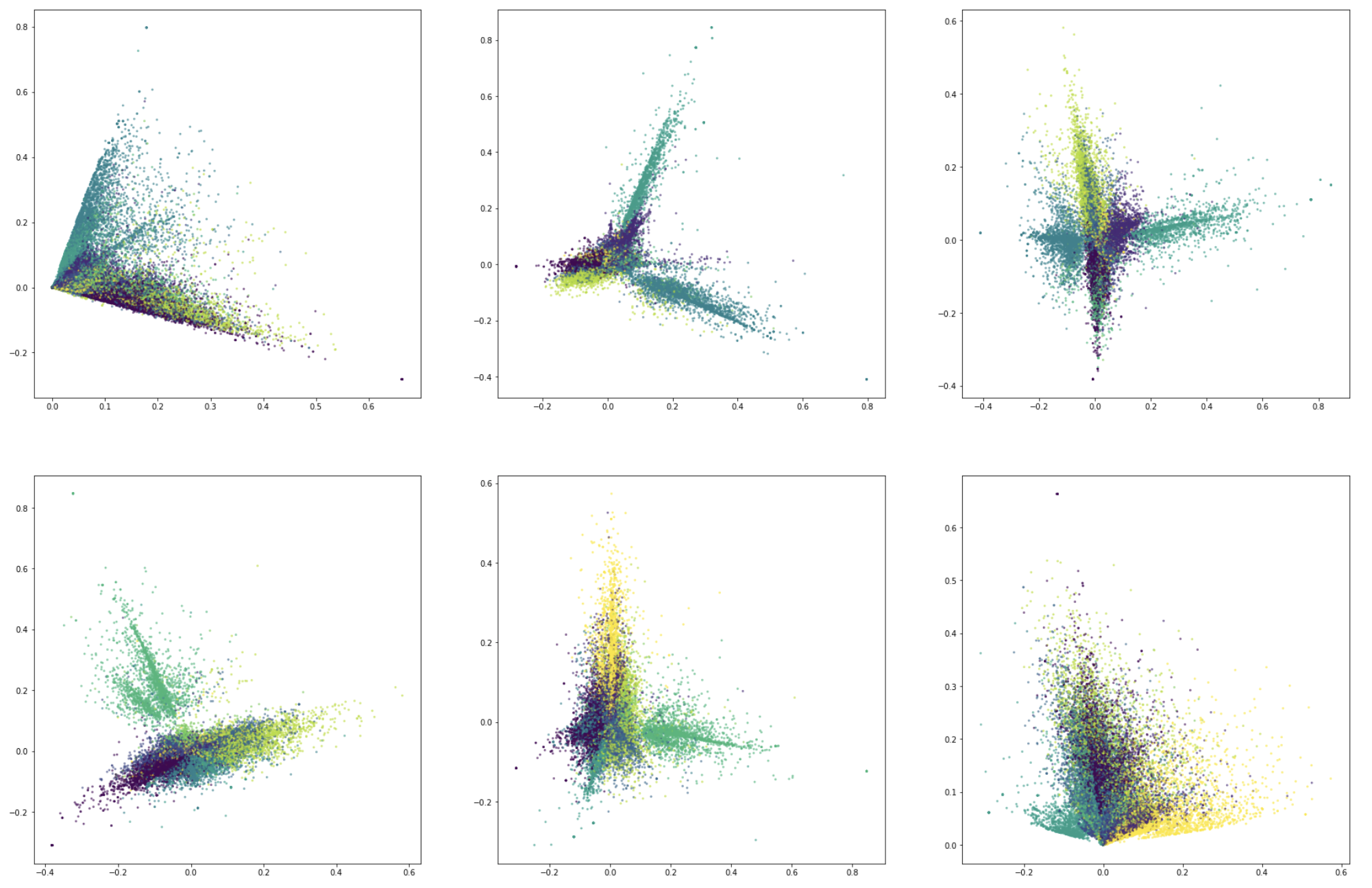 Figure 3: Dimensionality Space of Cookbook Titles after LSA: Select projections from 10-dimensional space (Colors are based on K-Means algorithm and are used for illustration purpose only) 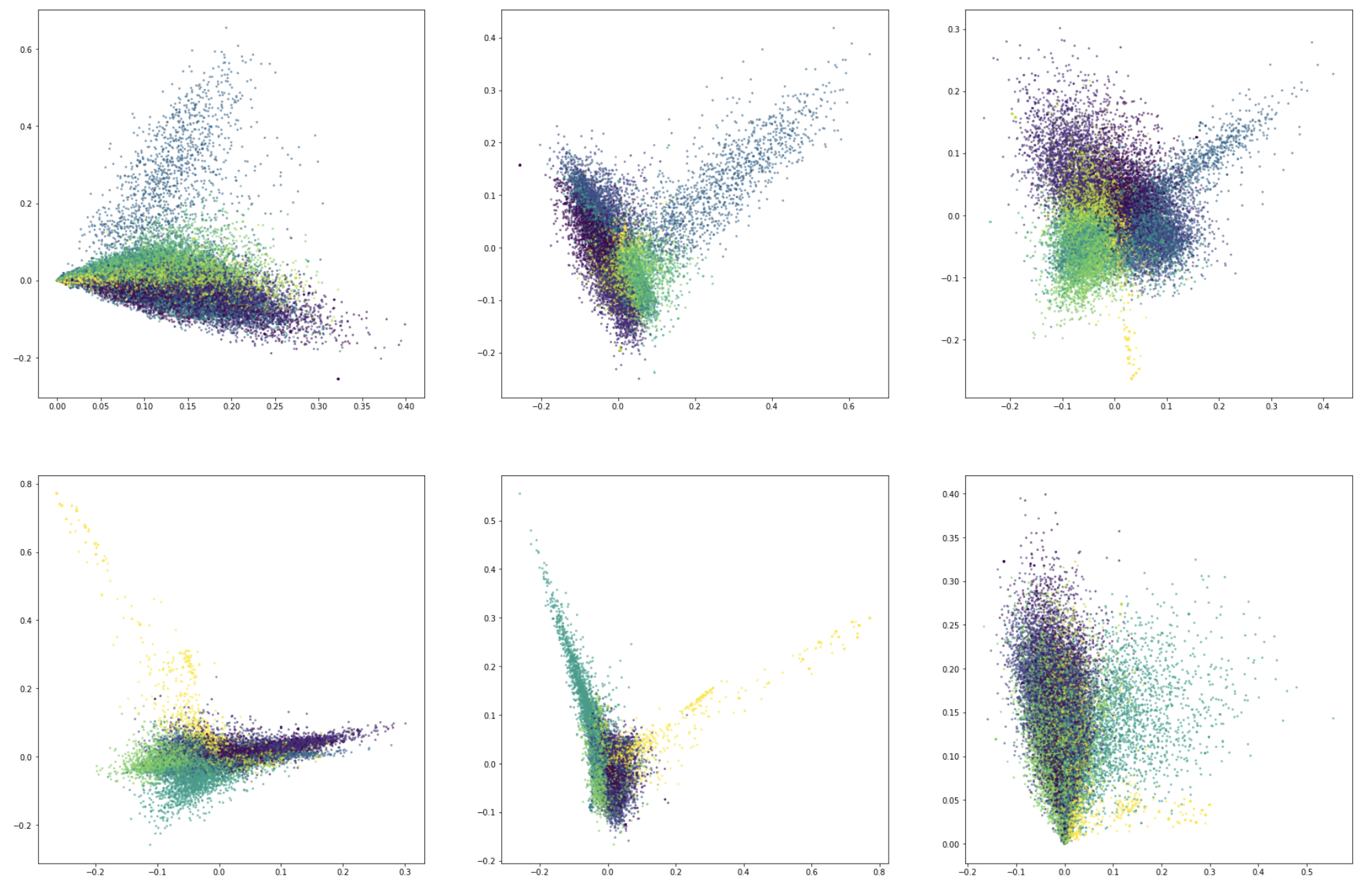 Figure 4: Dimensionality Space of Cookbook Descriptions after LSA: Select projections from 10-dimensional space (Colors are based on K-Means algorithm and are used for illustration purpose only)

For Stage 1 & 2, one approach would have been to introduce a new cookbook and check the ‘relevance’ of the recommendations. Instead, I took an explorative approach:

This explorative approach provided a means of discovering what the recommendation systems learned about cookbooks.

The results are quite fascinating to say the least. And I will make an attempt to visually present these in this section. As expected from figures 3 & 4, this explorative approach also revealed that book titles tend to recommend a “narrow” range of options, while book descriptions provide more broader perspective.

Content based recommendation systems often suffer from “information confinement area” problem where the same items are repeatedly suggested to the user based on their previous likes and purchases. This problem leads to a missed opportunity in helping the users explore more items that they might be interested in and perhaps would have lead to a purchase. Using two different recommendation systems for cookbooks will definitely address this issue.

The model discovered a number of topics and sub-topics of cookbooks. There are numerous categories and is impractical to explore all that the model learned!! A few categories that stood out are below:

A few categories that model discovered are:

The model results were only slightly better than the above two naive solutions. RMSE for the models are as shown below:

The primary conclusions from building the above recommendation systems are: